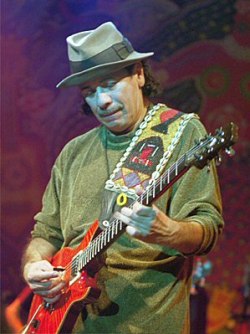 Carlos Santana is one of the modern guitar heroes. Singer, composer, bandleader who combines some eccentric spirituality into the music he creates. A man who’s contributed in shaping the image of “world music” through his distinctive style of diverse cultural music fusion, and who’s become one of the world’s most famous guitarists.

Carlos Alberto Santana Barragan was born in Autlan de Navarro, Jalisco Mexico on June 20th, 1947. Santana was raised in a family of music-lovers. In fact, his father was one great mariachi violinist. So at the age of five, he then started playing the violin but soon after his interest moved to guitar. And at the age of eight he started playing guitar following his music influence from great blues and jazz artists like John Lee Hooker, T. Bone Walker and B.B. King.

At that time, the family decided to move to a busy town called Tijuana. Young Santana was already on the move playing his guitar. He even joined some local bands in town and played small gigs at clubs and bars as a working musician.

Some time later another move had to be made by the whole family. Moving to San Francisco, California was another primary turning-point in Santana’s life. He didn’t even want to go at first because he was already settled in the previous town. However, in the end, he decided to follow his family to be with them anyway.

Beginning of his musical career

San Francisco is surely one of those places where creativity and music exist side by side. Santana was introduced to some other music influences which include jazz and international folk music. He was also fortunate enough to see his guitar heroes like B.B. King perform live.

Soon after Santana graduated high school in 1965, he wanted to continue his musical passion for playing guitar. He was able to join a few shows promoted by Bill Graham and others at the Fillmore Winterland, and Avalon ballrooms.

Blues and jazz was a long-standing hit all around and psychedelic music was also being developed at that time. From that point on, he was learning music from Muddy Waters, Mongo Santamaria and British rock as well as from members in some Bay Area bands.

One distinct band, The Grateful Dead was greatly influential to Carlos Santana’s improvisational music. During his long-time music work with various bands, he has become a very likeable musician because he never played his guitar solos more than once.

It is the eye-catching and ear-grabbing music style that makes him stand-out even more on stage.

In 1966, he formed the Santana Blues Band with his fellow performer David Brown – the bassist and Gregg Rolie – the keyboard player. They were absolutely without question a band that played a new different kind of music.

Their authentic fusion of Latin rock, jazz, blues and salsa with African rhythms received high regard from their audiences. All this was done with the accompaniment of Latin percussion, harmonious organ riffs and Santana’s extortionate solos as lead guitarist made the Latin band a phenomenon. These lead patrons come around following their band in music clubs and bars around San Francisco.

Then later in 1967, he decided to change Santana Blues Band to only “Santana” for a more memorable band name.

Their first significant appearance as a band was when Bill Graham booked them for Fillmore West Hall as an opening act for The Who. Their performance mesmerized the audience which gave them a reputation of “a band that just captivates the emotion of their listeners”.

Bill Graham was impressed by them and this led him to ask Clive Davis (President of Columbia Records at that time) to fly over to San Francisco and watch Santana and his band. He gladly flew and granted Graham’s request to watch the band perform. Davis was impressed as well; he then kept an eye on the band which later led him to break a record deal proposal for the band.

One breakthrough point for the band was during their Woodstock’s unforgettable 11 minute performance version of “Soul Sacrifice” in 1969 where he made an amazing appearance that blew the audience away. This was taken and included in the film “Woodstock” which gave Santana another massive portion of popularity.

From that first ever historical performance of their band, it earned them a record contract with Columbia Records under Clive Davis. As what Davis planned, a record deal was made with their debut album entitled Santana (1969). From their hit single “Evil Ways” in early 1970, the album became #4 on the charts earning a double-platinum and a spot on Rolling Stone magazine’s 500 Greatest Album list as #150.

This was later followed by Santana III (1971) and Caravanserai (1972) that were unquestionably a success. In fact, “Everybody’s Everything” and “No One To Depend On” reached the Top 40 chart. Santana III stayed at #1 for five weeks which resulted in the third successive multi-platinum award. 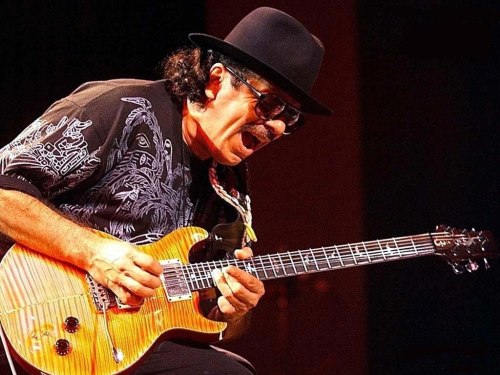 Changes in the band

It was not a totally stable group for Santana band. Members were frequently changed. They were young then and had self-seeking priorities. Santana himself became the center of attention flaunting his psychedelic guitar riffs to every performance.

Moreover, he also started some recording and performances as collaboration with other musicians, significantly with drummer Buddy Miles, pianist Herbie Hancock, and guitarist John McLaughlin.

During those days, Santana was inevitably part of the drug-bewildered world of 1970s rock music. So trying to make a change, he and McLaughlin became dedicated followers of the spiritual teacher Sri Chinmoy. Santana turned to this new-found guru, teaching him meditation and a new class of spiritually-filled music, which you can evidently hear on the jazz album “Love, Devotion, Surrender” (1973) that he and McLaughlin recorded.

So along the 1970s and early 80s, Santana and his band was able to release more successful albums utilizing their unique and distinct sound, as always. Great albums that they created were Amigos (1976) and Zebop (1981).

However his high status in the music industry was beginning to decline because of the listeners losing interest in rock and jazz fusion.

But this did not stop him from receiving many significant awards throughout the years. He won his first Grammy Award on Best Instrumental Performance for the 1987 solo album Blues for Salvador.

In 1991 Santana decided to leave Columbia and signed a new contract with Polydor. He then recorder the Milagro album in 1992 and Sacred Fire: Live in South America (1993). And although he wasn’t anymore a follower of Sri Chimnoy at that point, he was able to remain deeply spiritual with his belief.

And with his own label – Guts and Grace – he released a collaborative album called Brothers, with his brother Jorge Santana and nephew Carlos Hernandez. This was then nominated for a Grammy for Best Rock Instrumental in 1994.

Yet another ground-breaking comeback on the pop hit charts transpired when Santana renewed his contract with Davis in 1997, this time with Arista Records. Davis created a list of highly distinguished musicians to which he included Santana, together with Eric Clapton, Lauryn Hill, Dave Matthews and Wyclf Jean. They all performed in the legendary guitarist’s 35th album – “Supernatural” – which was released in 1999. By early 2000, the album has smashingly sold 10 million copies worldwide which gave “Smooth” the #1 rank on the top charts, making it a hit single, sung by Rob Thomas featuring Santana’s Latin inspired electric guitar licks.

His Shaman award-winning album which was released in 2002 has also garnered countless accolades. And together with Michelle Branch, Santana won the Grammy Award for the Best Pop Collaboration with Vocals for the song “The Game of Love”. This was followed by a fascinating group of artist collaborators like Mary J. Blige, Los Lonely Boys, Steven Tyler and many other musicians who were featured in his album “All That I Am” released in 2005.

Four years later Santana accepted the Lifetime Achievement Award at Billboard Latin Music Awards. He also presented his very own music review called “Supernatural Santana: A Trip Through the Hits” that took place in the Hard Rock Hotel and Casino in Las Vegas during that same year.

Carlos Santana innately remained a spiritual person. He hasn’t failed to harmonize his career with having a constant commitment to social involvements and philanthropy. He has not only changed his life for the better but has also touched the lives of many others, through his founded charity named Milagro Foundation. This foundation was opened in 1998 for the purpose of supporting innumerable other charities and non-profit agencies around the world focusing on the less fortunate children, providing for their health and education.

More than that, he has also been seriously involved in the battle against AIDS, the pandemic disease in South Africa, through his partnership with ANSA (Artists for New Africa). That is why the profit from his 2003 American tour was donated to the cause.

These are just a few of the active involvements that Carlos Santana is presently participating in.

He also entered the social media business where he founded the revolutionary and idealistic project called Architects of a New Dawn, structured to enable freethinkers worldwide to create a positive change reaching out to people across the universe. His vision for this network was to involve his followers with exceptional music, liberal media content and life-changing ideas, advocating a new reality based on encouragement, creativeness, love and compassion.

It has been 40 long years on stage for Carlos Santana. Being on the highpoint of his musical career, everything has been more essential and meaningful for him than ever before. He shares in his personal biography that, “I feel really happy. I am more happy than I have ever been in my life because I am grateful… We hope to touch many, many people’s hearts with GUITAR HEAVEN… It’s like Olivia said, our goal is to make people jump with joy and cry at the same time.”

It’s visibly clear that he is living life to the fullest – a life that can touch other peoples’ lives. That’s what he wanted and what he never fails to do. He has been loved by his longtime fans that followed him four decades ago. And now a new set of Santana aficionados from this new generation has come to love him even more.

These people are captivated by his signature sound that is all-time enchantingly rare and yet recognizable.

Finally with his lifelong success and love for music, every action that Carlos Santana takes becomes an universal event that never fails to make a difference for the whole world.