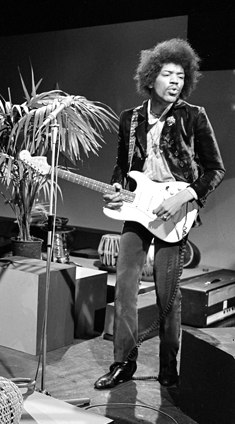 The world of music “rocked hard” during the late 60s. And who was behind it? Jimi Hendrix, a legendary rock guitarist, singer, songwriter and music experimenter. The fact that he has made it to the top despite having a relatively short career gives the best reason exactly why he is a legend.

One very unforgettable career defining moment on Jimi’s performances was on the verge of 1969 Vietnam War, where he played US national anthem “The Star-Spangled Banner” at the Woodstock Festival. The whole America was swayed by the powerful gesture he did for the country. And that was simply historical.

Jimi Hendrix was born in Seattle, Washington on November 27, 1942 as the eldest son of Al and Lucille. He was given the name Johnny Allen Hendrix. Later at the age of 3 his father changed his name legally to James Marshall.

At that time, young Johnny was already fond of imagining himself as a guitarist. This happened inside his room while supposedly sweeping, his father would always see broomstick bristles on the floor as he was playing like it was a guitar. So at the age of 15, Al bought him his first acoustic guitar. This heightened his enthusiasm for learning.

He taught himself to play and would practice long hours while listening to records. He was so passionate to learn that he would also watch other professional guitarists play and then later on ask them for advice.  He also loved listening to the music of well-known blues artists like BB King and Robert Johnson, which later became very influential to his own music. But at that time, life was not gracious to Jimi. He was 16 when his parents got divorced. Not long after that his mother got sick and passed away.

For him music was a way of escaping the reality. So he started playing professionally with two bands – Rocking Kings and Tomcats at venues like Birdland. He didn’t finish high school but continued to pursue his musical dream instead.

Hendrix was later caught into trouble with the law twice for driving stolen cars. This was his reason to join the US Army since he was given the option to go to jail or serve the country. He chose to enter the army in 1961 and was trained to be a paratrooper in Fort Ord, California.

But military life didn’t change his passion. He continued to play and created a group named The King Casuals. Fate has been both good and bad to him at that time. A year after his enlistment, he was discharged from service due to an accident that took place, thus allowing him to continue pursuing his dreams.

As he was recovering from injury, Hendrix didn’t stop reaching his goals. He worked as a session musician under the name of Jimmy James who played back-up for great performers like Little Richard, Sam Cooke, Tina Turner and the Isley Brothers.

After vigorously playing and working with Little Richard, Hendrix got involved in a contract argument with the capricious artist which led him to leave the band. He then created his own band named Jimmy James and the Blue Flames in 1965.  This was the start-off point where Hendrix stepped into the limelight and played lead guitar.

Rise of the Legend Despite all his efforts Hendrix was still broke. This was up until mid-1966 when he met Chas Chandler, Animal’s bassist. Chandler was really impressed with him. Later on Chandler offered Hendrix to make him his manager. Hendrix agreed and moved to London. From there he joined forces with Mitch Mitchell and Noel Redding. A band called The Jimi Hendrix Experience was formed.

While he was in London, his career was starting to grow. He was able to capture the hearts of rock royalty fans in London and even some of the famous bands like The Who, The Rolling Stones, members of the Beatles, and the rock and roll Hall of Famer Eric Clapton. All of them honored the works of Jimi Hendrix.

Hendrix entertained audiences with his unique and despicable way of guitar playing as well as his imaginative inventive sounds. He loved overdriven effects with high gain and treble. He popularized the use of wah pedal in contemporary rock. These were the methods he used to produce heightened pitch solos. He also used many advanced guitar techniques. All the changes and innovations paved the way for the creation of his signature sounds.

On June of 1967, his fellow Americans got a chance of the “experience” when the band was invited to the Montery International Pop Festival. In fact it was Paul McCartney who persisted that the band must perform at the festival. Their performance was really astounding. It was the night when Hendrix actually set his guitar on fire.

It was a night full of craze. The audience was simply overwhelmed by his performance. Moreover, it was also the birth of a rock superstar.

The second album, Axis: Bold as Love was released in 1968 which also hit the charts. Shortly after it was followed by the third album Electric Lady Land which then became his final involvement with The Jimi Hendrix Experience. The single “All Along the Watchtower” from that album, written by Bob Dylan has also hit the top of the charts. On 1969, The Jimi Hendrix Experience disbanded.

Hendrix continued his quest for music and later performed in America’s famous music festival The Woodstock. He played his own rock rendition of US national anthem which ultimately wowed the audience. That heroic act he showed to the people has also been called the highlight of the decade. In fact, New York Post called it, “the single greatest moment of the 60s”.

Widely known, he was not only a guitarist but a songwriter and a “music inventor” as well. In fact he owned his recording studio which he called Electric Lady Studios.

In late 1969, Hendrix tried to establish another band which he called Band of Gypsys and this was with his friends Billy Cox and Buddy Miles. But unfortunately it never really worked out. Although before they disbanded, they were able to make two public appearances and released a self titled album – Band of Gypsys.

Nonetheless, during mid-1970 and after the split of his second band, Hendrix started to work on a new self-authored album which he called First Rays of the Rising Sun. This was with the help of Billy Cox and former co-member Mitch Michelle from The Jimi Hendrix Experience.

Hendrix made it to his last concert at the Isle of Wight Festival in Britain on August 1970. And just one month after, on September 18, 1970 at the age of 27, the tragedy of his passing took place. The cause of his death – drug abuse.

The Legend Lives On

In April of 1997 Hendrix’s First Rays of the New Rising Sun album was finally released with the support of his family and original studio engineer Eddie Kramer.

During his short career Jimi recorded over 300 songs. He has garnered innumerable awards and recognition during his lifetime and even after his death. In 1992 he was recognized by US Rock and Roll Hall of Fame and in 2005 followed by UK Hall of Fame. A star on the Hollywood Walk of Fame at 6627 Hollywood Blvd. was dedicated to him in 1994. His debut album “Are You Experienced?” was recognized by the US National Recording Registry. And the list just goes on.

Jimi Hendrix lives on. From his own singing style with great and strong stage presence down to his unique songwriting skills and up to the innovations he made, Jimi Hendrix has made his trademark strong. The legacy he left behind has become influential to many artists of today.

E Pentatonic Blues Guitar Scale – How to Play it

F Pentatonic Blues Guitar Scale – How to Play it