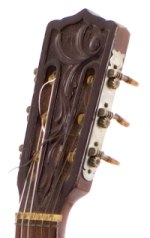 Among other series that have been going on here on this blog, there’s a small series on alternate guitar tunings. So far, we’ve covered some basic dropped tunings and basic opened tunings.

Today, we’re looking into two open minor tunings, the Dsus4, and we’re also going to talk about tuning your guitar whole step down.

Just to remind you, in this series we’re talking about different alternate guitar tunings. In essence, an alternate tuning is every tuning in which at least one string is tuned differently than usual.

Our first tuning of the day:

This tuning is very similar to the open D major tuning, and only one string needs to be tuned differently.

The best way to get your guitar to this tuning is to start with the open D major and then tune the G3 string one half step down from F# to F.

Like all opened tunings, this gives you a nice sounding chord when you strum all strings without fretting them down. In this case, it’s the D minor chord.

The story is very similar here too. The best way of getting this tuning is to start with open C major tuning, and then tuning one of the strings down one half step. This time, it’s the E1 string.

In the open C major tuning the E1 string is tuned normally giving an E note. In open C minor you have to tune it down to D# (or E flat).

First, let’s take a look at the note layout for this alternate tuning:

What’s interesting about it, is that all intervals (the difference between two notes) for open strings are 4ths (except for a smaller interval between the strings G3 and B2).

Such a layout enables you to play consecutive notes of a scale without fretting down any strings (or by holding them all down with a bar on any fret).

Tuning your guitar this way is rather simple. You only have to tune the strings E6, B2, and E1 all one whole step down from the standard tuning.

The idea here is simple, it’s still kind of a standard tuning, only one whole step down.

As you can see, every string in this tuning is simply tuned one whole step down.

Why would you need such a tuning? For me, it is handy when I want to play something using a pitch that’s just a little lower than usual.

You see, when you want to play something a bit higher you can always use a capo, but unfortunately, there’s no capo that lets you play lower, and that’s where alternate tunings come into play.

However, you can’t go too wild with this. Even though tuning your guitar one whole step down still makes it sound good, any more than this won’t give you the best tone. The strings will simply start buzzing. So if you want to play something that’s really low consider grabbing a different instrument.

That’s it for this part of the series. Tune in next time for another portion of alternate guitar tunings. Until then, don’t forget to subscribe to this blog (you’ll get the posts delivered to your email address the minute they are published).

Creating this Perfect Piece of Music