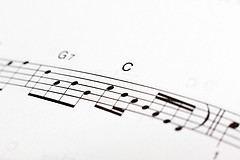 Six strings and 24 frets give you a lot of possibilities when playing your instrument. However, there are only seven distinct notes in the musical alphabet: A, B, C, D, E, F, and G. Kind of like a standard alphabet, only ends on G. This quick lesson takes you through the basics of guitar fretboard notes (aka note layout), explaining where the notes are, and how to begin memorizing them.

To be honest, guitar fretboard notes have always been a problem for me. Whenever someone said something like “give me the upper C” I didn’t have a clue what to do. So I began slowly by memorizing basic notes, and then learning how do they work in a sequence and what the layout on the fretboard is. Eventually, I was able to give this dreaded upper C and all. Here’s how, I hope it’ll work for you too.

As I said, there are seven basic notes in the musical alphabet: A, B, C, D, E, F, and G. They come in a sequence and then repeat themselves. Each not is of course higher in pitch than the previous one.

These differences in pitch are called intervals. There are two different intervals that occur between adjacent notes (A and B, or B and C, and so on):

Basically, there’s a whole step interval between any adjacent notes. Except for B and C, and E and F – these are half steps. In essence, for all guitar fretboard notes:

This can be shown very easily on my small AKAI keyboard. Notice where the B, C, E, and F notes are placed. 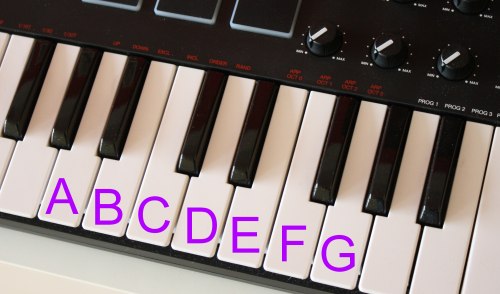 Now let’s go back to the guitar’s fretboard. On the fretboard, each note is separated by a half step interval. So one fret difference is one half step, and two frets are one whole step.

You know the basic layout of the open strings: E, B, G, D, A, E. If we take the A string, for example, and hold it down on the first fret we get an A#; second fret is B; third fret is C (according to the half step difference between B and C); fourth fret is C#, and so on.

Here’s a full layout of the guitar fretboard notes (click to enlarge):

Your job as a guitarist is to remember three things:

If you keep these things in mind you should be able to locate every note on the fretboard easily.

So if by any chance someone asks you to give them a high C the only thing you have to do is start with an E on the 12th fret of the E1 string and go two whole steps down (four frets) to the 8th fret – there’s your C.

Being able to switch notes smoothly can be hard when you’re just starting out, but you just need to fight the initial difficulties. After a while, identifying various notes on the fretboard will come easily with no effort.

Do you have any other way of finding notes on the fretboard you’d like to share with others?

3 Steps is All it Takes to Play Guitar Standing Up