“The Pact With the Devil” – Robert Johnson – The Profile 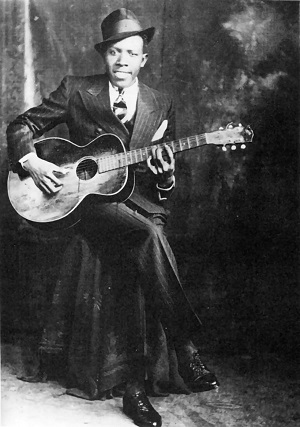 Robert Johnson, a great blues performer who only lived 27 years, yet, has managed to influence the world of blues music and inspire later generations of musicians. Let’s take a look at the short life he has lived and the legends that surround him.

Robert Johnson is known for his hits like “Sweet Home Chicago” and “I Believe I’ll Dust My Broom.” Living only 27 years, he was said to be a victim of deliberate poisoning. One great (urban) legend that surrounds this man is how he presumably acquired his musical talents, which is believed to be given by the devil himself.

The Best of His Career

Robert Johnson was doing most of his work in Mississippi. However, his musical works were more recognized after his death. Nevertheless, Johnson’s brief career allowed him to travel and play where he could at that time. He was able to write, record and sing 29 songs from 1936 to 1937. He was mainly performing in places like San Antonio and Dallas.

His major hits mentioned earlier are blues standard. Popular singers and bands have re-recorded these songs as their own namely The Rolling Stones, Muddy Waters and Eric Clapton.

Robert Johnson was born on May 8, 1911 in Hazlehurst, Mississippi. He was the son of Noah Johnson and Julia Dodds. His mother, Julia, was married to a landowner and furniture maker named Charles Dodds; to whom she had 10 children with. Unfortunately, Charles was forced to leave Hazlehurst due to mob problems about the land dispute (white vs. black landowners). Hence, Julia had to leave with Charles and brought baby Robert with them to Memphis.

By 1919, Julia had a new husband in the name of Dusty Willis. They were living in the Mississippi Delta at this time. Robert was known as “Little Robert Dusty” but was still registered as Robert Spencer at school (Charles Dodds changed his name to Charles Spencer upon moving to Memphis).

Robert studied from 1924 to 1927. Willie Coffee, a school friend said that Robert was known for his skills in playing the harmonica and jaw harp. But he was always absent for long periods of time.

When Robert was finished with school, he adopted the name of his real father and became Robert Johnson. This was the name he used on his marriage certificate when he married Virginia Travis in 1929. Virginia was only 16 years old at that time and she died shortly after childbirth.

Virginia’s relatives believed that the death of Virginia was a punishment for Johnson; a punishment for selling his soul to the devil. Robert took this as a sign to focus on being a full-time musician instead.

By 1931, Robert Johnson became a father to a child with Vergie Mae Smith. But, he married a different woman in 1932 by the name of Colette Craft.

Son House was a famous blues musician during those times. He and musical partner, Willie Brown, lived in Robinsonville at this time. House recalls Robert Johnson as the boy who can play the harmonica but was a terrible guitarist.

But when Robert Johnson left Robinsonville, he was already perfecting Son House’s guitar style as well as Zinnerman’s guitar style. By the time he came back, he has already mastered his guitar technique.

When Son House was asked if he attributed to Johnson’s pact with the devil, his answer showed confirmation of this pact. He said that Johnson disappeared for a couple of days and he was a bad guitar player then. But just after that, he has mastered his guitar already.

The Devil Legend is one of the enigmas that surround Robert Johnson. Johnson was described to be a young boy with a burning passion to become a blues musician. The devil instructed him to bring his guitar at Dockery Plantation at midnight. He followed the instructions and he met the devil there. The devil took his guitar, tuned it and played some songs. The devil gave the guitar back to Johnson together with the ability to master guitar playing.

This is the legend that talks about how Johnson sold his soul to the devil to become one of the great blues musicians of all time. And maybe, why he died at such an early age. (If you choose to believe in it, obviously.)

Appeal to the Masses

As previously mentioned, Robert Johnson became more recognized after his death. This was when his works were re-issued in 1960 and again in the 1990s. His re-issued works sold millions.

The success of his works may be both attributed to the legend that surrounds the man as well as the marvelous works he did.

Robert Johnson died on August 17, 1938 and he was only 27. The cause of death was believed to be deliberate poisoning. Although not much has been said or described about his death, there are some films that have been able to tell the story like Hellhounds on my Trail (2000) and Can’t You Hear the Wind Howl (1997).

In 1990, following the release of his “The Complete Recordings” album, which feature all of Robert Johnson’s songs (all 29 recordings) was awarded the Grammy for “Best Historical Album.” In 2006, Robert Johnson was given the Grammy Lifetime Achievement Award. It was accepted by Claud, his son.

Although known for being a blues musician, Johnson also left his mark on music genres like rock and rock n’ roll. His four songs were put in the Rock and Roll Hall of Fame. These songs were Sweet Home Chicago, Cross Road Blues, Hellhound on My Trail and Love in Vain.

In 1986, the Museum inducted Robert Johnson as “Early Influence.” This just goes to show that his work was only recognized way later after his death. But then again, this also showed that even when Johnson made his music in the 1930’s, people still loved it even a century after. And this just proves what a talent this man was.

Learn How Famous Guitarists Get Their Signature Sound