On the list of guitar legends, Eric Clapton is surely one of the most prominent names. He isn’t just a great guitar player, he is an inspiration. Let us get to know the man behind the unforgettable songs like “Tears in Heaven” and other memorable acoustic guitar riffs.

Eric Clapton’s full name is Eric Patrick Clapton and he was born on March 30, 1945. Eric was mostly raised by his maternal grandparents. Eric’s mother Patricia Clapton gave birth to him when she was only 16 and his father Edward Fryer wasn’t really there for him. He was born in Surrey, England.

Eric Clapton was born in a family that loves music. His grandmother and father (Edward) played the piano and this gave young Eric an early appreciation of music. In 1961, he went to Kingston College of Art to study art. But, he didn’t perform well as his love for music grew more.

At 17 years old, Eric bought an electric double cutaway Kay and this started his journey in music, particularly, guitar playing. By 1963, Eric was playing for the Roosters and was performing briefly alongside The Engineers and Casey Jones. Nearing the end of that year, Eric was able to join The Yardbirds and he was a part of the three albums named Five Live Yardbirds, Sonny Boy Williamson and The Yardbirds. 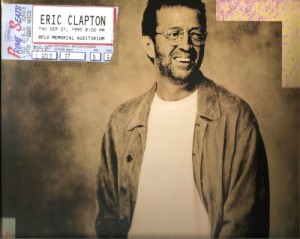 By 1970, Eric Clapton became a popular rock guitarist of his time. He launched his solo career this year and also marked the launch of his own album, a self-titled one. His song “After Midnight” reached the Top 40 after the album launch. But before all this, Clapton was assembling a group named Derek & The Dominos.

In 1971 and 1972, Clapton was inactive due to his heroin addiction but he came back on January 13, 1973 at the Rainbow Theater in London. This performance led to the Rainbow Concert album that was launched in September of the same year. It was only in July 1974 that Clapton finally sustained his solo career with the launch of his album 461 Ocean Boulevard.

Eric Clapton, since the start of his solo career return in 1974 has never stopped making hit after hit. But although he was known to be a rock star, Clapton was making more ballads than rock songs. His hits were as follows:

All these years, no album made the most sales than Clapton’s concert for MTV Unplugged that was released in March 1992. By 1994, Clapton made an album that was focused on blues, and it became another successful release. In 1997, Eric Clapton released the album Retail Therapy and then Pilgrim in 1998. 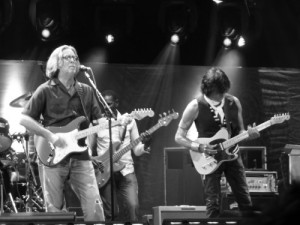 Since 2000, Clapton has been collaborating with different artists like B.B. King, Jack Bruce and Ginger Baker for songs and concerts. In 2006, he recorded a duet album with J.J. Cale named The Road to Escondido. In 2007, he released an autobiography together with a compilation entitled The Complete Clapton. In 2008 and 2009, Eric Clapton focused on playing shows together with Steve Winwood. This partner also led to Clapton’s 2010 album.

In 1979, Clapton was married to Pattie Boyd but by 1984, he had an affair with Yvonne Kelly which lasted for a year. Clapton had a daughter with Yvonne but they kept it a secret at first. She was only revealed by 1991. In 1988, Pattie and Clapton got divorced due to another affair with Lory Del Santo, whom he had a son with. Sadly, Pattie was not capable of having children.

Following the divorce, Clapton got married to Melia McEnery in 2001. They had two daughters, Ella May in 2003 and Sophie Belle in 2005. Isaac Bartlett, his grandson was born in June 2013.

The most controversial yet heartbreaking moment in Clapton’s life was when his son, Connor, died in 1991. Connor was only 4 years old. It was a very tragic death. Connor fell out of their 53rd floor Manhattan apartment. The bedroom window was left open. Clapton made the song Tears in Heaven for him.

Eric Clapton was a musical genius. And he was certainly acknowledged for it.

How to Learn to Play an Instrument the Easy Way