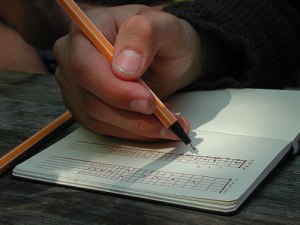 A while ago I gave you some advice about the basis of reading guitar tabs. Today it’s time to look into some advanced notations and techniques. By “advanced” I don’t necessarily mean that they’re difficult to perform or anything. I’m sure you’ll wrap your mind around them in next to no time.

I you want to learn what hammer-ons are and how to perform them please check out this post: Guitar Hammer-On Technique – How to Master It.

Just to give you a basic idea, a hammer-on is when you’re making two or more sounds with just one pick/pluck.

On tablature hammer-ons are indicated either by “h” or “^” symbols. The “^” symbol originates from formal music notation.

On the example below you can see a quick exercise for performing hammer-ons. It starts on the 5th fret of the E6 string. What you need to do to perform this first sound is to pick the string once and then quickly hammer it on on the 7th fret.

You can learn more on pull-offs here: Guitar Pull-Off Technique – How to Master It. Basically, it’s a reversed hammer-on.

On tablature pull-offs are symbolized by “p” or again “^”.

The example below presents some simple pull-offs. It instructs you to pick the E6 string on the 7th fret then release it while holding the string down on the 5th fret (remember not to re-pick the string as you release your finger from the 7th fret).

Slides are so simple that they don’t really require much explanation. You simply play a sound while holding a string down on a given fret and then slide the finger up or down the fretboard until you stop on other fret.

The image below shows a simple exercise, where you have to start by picking the E6 string on the 5th fret and then sliding your finger up to the 9th fret and stopping there.

In some instances, numbers are not found after the slide symbol. That means that you just have to slide until you run out of frets.

Bending is a technique that requires you to play one sound and then bend the string until another note can be heard.

String bends have different notations on various guitar tabs. Some tabs present it as an upward arrow along with a number representing the sound that the bend has to reach, but the most common representation of bends is the letter “b”.

The figure below shows a simple bending exercise. You start by picking the E6 string on the 5th fret and then bending the string until you hear the sound which the string normally makes when it’s being held down on the 6th fret. Being able to hit certain sounds while bending needs a little practice to master but it’s worth it.

Another side of bending is the ability to go back to the original sound by releasing the bend. This is usually symbolized by “r”.

For example, 6b8r6 means that a string has to be bent on the 6th fret up to the 8th fret then released back to the 6th fret while still making a sound.

Vibratos are really easy to perform. You just grab a string on a given fret, pick it and then vibrate the sound with your left hand finger.

The most common symbols for vibratos are “v” or “~”.

Please take a look at the image below for a quick demonstration. What you see there are two notations but they both tell you to do the same thing. That is to pick the E6 string on the 5th fret and then vibrate it a little.

Tapping is a really interesting technique because you don’t pick or strum any note on the guitar instead you just tap the note on the fretboard using your right hand (strumming hand). Joe Satriani is really exceptional at this, by the way.

First, check out how tapping is done by pros.

The most common symbol for tapping is “t”. Here’s an example:

That’s it for this edition. Tune in next time because we’re sure ain’t done with tabs yet. Lastly, tell me what do you find the most challenging when it comes to guitar tabs? What do you struggle with the most while reading them?

Online Guitar Lessons by GuitarTricks Review – No BS, I’m Telling it Like it is