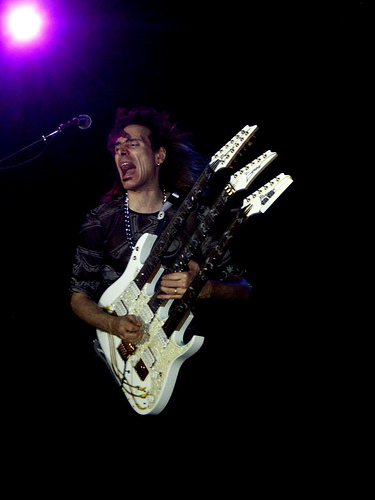 One of the world’s greatest performing American guitarists ever known to mankind is Steve Vai. You may think I am exaggerating but no way I’m not. He has deserved his highly regard reputation in the music industry brought about by various Grammy awards, his nominations, other music awards and he even sold 15 million albums, that you can say, “Indeed, what a great talent he possesses!”

This musical genius was born on the 6th of June 1960 in Carle Place, New York USA. As young as 13 years old, he laid his hands on a guitar and has been playing since then.

(Since we’re already speaking about this – find out what’s important when buying your first acoustic guitar.)

You would probably ask how in the world he procured such talent and skills for music. Well you see in the beginning, some rock artists fascinated him, like Jimmy Hendrix, Led Zeppelin and Alice Cooper. He was even mentored by the famous Joe Satriani during his youthful years. And then, he went to Berklee College of Music in Boston to pursue his passion. At an early age, he became fanatical with the works of Frank Zappa, to the point of listening closely and transcribing the hardest composition made by the artist. Later, he sent it to Zappa who was blown away by such flair. Zappa then invited him to join his band and that was the start of his breakthrough career.

However, like what many other artists go through, he went solo and released his first own album during the late 80s. Not far too long, Steve was voted as the Best Rock Guitarist in Guitar Player magazine and was often noticed by the world’s guitar press. Would you imagine that, at an early point of his career, he would be at the top of the list and be featured at the front cover of the magazine? Definitely, you can say that he was and still is a phenomenon. So right then and there, his career started to flourish.

Interestingly, he is known for having a perfect pitch, accurate ear, as well as having a deep knowledge of music theory. So you will notice that his playing style tends to be characterized as peculiar and “slanted”. This is why he is considered as having an exceptionally unique musical illustration. If you come to know and listen to his music, you will feel the madcap of his virtuoso. His soulful artistry just draws out the scale of human emotion inside you. He has his own style and distinctive arrangement of techniques that emphasizes his versatile approach to playing guitar music. Hence, you can absolutely tell that his passion for music clearly shows each time he performs. For this reasons, he has won 3 Grammy Awards and 9 Grammy nominations. Not only that, you will see that he has been featured as the front cover of various guitar player magazines sixteen times. And there are other awards and recognition he has achieved that you can check just in case you’re interested.

Furthermore, you will also come to realize that his success comes from his generous heart. One of his earliest charitable works was Make A Noise Foundation which he founded with Richard Pike. You will find it amusing that this foundation aims in providing musical instruments and music education to aspiring musicians who cannot afford it. Naturally, you can therefore say that he has been sharing his blessings in his own simple ways.

So what really makes him who he is right now? Well you can clearly say that,” Steve Vai has found his passion”. If you look closely, he is living his purpose in life and that is to create music with pure originality. So that is what makes him, once again, a musical genius.

A Harmonic Minor Guitar Scale – How to Play it

B Harmonic Minor Guitar Scale – How to Play it