8 Metallica Songs That Will Make You a Better Guitarist 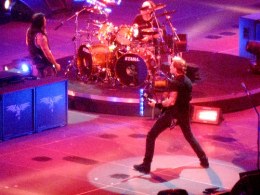 Metallica, my favorite band ever. Surprising, ain’t it? Anyway, Metallica is not only great for listening to in the morning, it is also great for learning from. The following set of 8 songs presents how you can learn from Metallica and improve some of the most important skills a guitarist can have.

Let’s open this up with Master of Puppets. This song is one of the most recognizable work of Metallica. Beginner guitarists all over the world still see it as the holy grail of guitar playing till this day.

At roughly 5 minutes and 30 seconds into the song we can experience a seriously fast guitar solo. As a guitarist you can use this solo to catch some interesting tricks and techniques used.

If you take a look at the tabs you’ll realize that the solo is not actually that complicated and that the peace at which it’s played adds a lot to the overall impression.

Also, if you take a look at this S&M video you’ll see that Kirk is not particularly tired by playing it.

Have massive impact with simple riffs

This time we’re looking at For Whom The Bell Tolls.

The song is really simple to play, at least for the most part. That is why it’s often played by many beginner guitarists.

So the lesson here is that not everything needs to be complicated to have a massive impact.

Whenever you’re working on a new song try to start with something very very basic, and then improve to something more complicated. Chances are that very quickly you’ll realize that a song doesn’t need to have an expanded melodic line, but it needs to create an impact.

We’re sticking to the idea of simplicity here. Now it’s time for the most recognizable Metallica song ever – Nothing Else Matters.

About 4 minutes and 50 seconds into the song we can experience the most memorable solo ever. It only lasts about 15 seconds, but it is enough.

A solo doesn’t need to be long to be remembered and unique. I hate to say it, but guitar music is rarely about playing a solo-like thing throughout the entire song. If the song you’re working on is around 4-5 minutes long then 15 seconds truly is enough for a solo. Make it count.

Creating an entire song out of a couple of chords doesn’t seem like an attractive idea, but sometimes it works perfectly well. As a proof, here’s Mama Said.

This is a great song. Truly melodic and memorable. Probably the most memorable song from the Load album. It is steady and calm.

What you can learn here is that not every tune needs massive riffs throughout the whole duration of it. Sometimes starting and ending with simple chords is a better way out.

Creating a story with guitar only

There are tunes where at some point vocals kick in and take over them completely. But there are others where the guitar is the only element responsible for telling the story.

The difficulty in creating instrumental tunes is exactly this. Simply playing something that sounds okay isn’t good enough. You need to tell a story with the melody your guitar produces.

This can be best explained by a tune named The Call of Ktulu. Notice how the story starts, evolves, changes, and finally ends. There’s simply no place for vocals there because guitars are telling the story till the last line.

Is there even a lesson here? Yes. The lesson is that sometimes you just need to play whatever you feel like playing, and create riffs and melodies so ferocious that your mom would call you mad if she heard them.

Or, in essence, having the freedom of doing whatever you damn please with a song. Just because you started with a particular melody and force, doesn’t mean that you can’t change it somewhere mid-song.

One example of such a practice is Master of Puppets described earlier, and another is Orion.

This tune starts somewhat calm, but pretty powerful at the same time. Then it evolves to a really strong riff, and then somewhere around the 4 minute mark it shifts to a completely calm melody, only to evolve into a powerful solo and end with a big impact.

Changing style of playing depending on the instrument

This is tricky, but bear with me. How often do you see someone grabbing an acoustic guitar and trying to play Master of Puppets in a normal way, like they would hold an electric? This is just not cool, and the song can’t possibly sound just as good.

What to do, then? Well, depending on the instrument, you can change the style of your playing a bit, just enough to make a given song sound just a little cool, or at least not desperate.

As an example check out this unplugged version of Disposable Heroes.

Here’s the original, by the way. Completely different songs, right?

Do you have any more ideas on how to use Metallica for inspiration and learning how to play guitar? I’m sure there’s something more I haven’t mentioned.

How to Change Classical Guitar Strings