Stevie Ray Vaughan was undoubtedly one of the best guitarists of all time. It’s therefore about time that we get to know him better and his journey to becoming a guitar legend.

Stevie Ray Vaughan’s real name was Stephen Ray Vaughan. He was a guitarist and a songwriter. He was born on October 3, 1954 and passed away on August 27, 1990. He didn’t live past 35, but he sure did leave his legacy behind. He was born in Dallas, Texas but died in East Troy, Wisconsin.

Stevie Ray started to play the guitar at a very young age. Because of this early start, he eventually became a lead singer for a band and even had the chance to work with famous musicians like David Bowie and Jackson Browne. He received a Grammy for one of his albums and also worked with Jimmie, his brother in his album.

Playing the guitar was a bit out of the usual for Stevie Ray. He didn’t learn reading sheet music, but instead, relied on his exceptional hearing skills. By the time he was in high school, Stevie Ray was already teaching himself to play the blues. He performed at a Dallas Club as a way to practice and hone his skills.

When Stevie Ray was a junior, he was playing with different garage bands. At that time, his focus was solely on playing music. As a result, he struggled in school and didn’t have any motivation to excel in his academics. Not long, Stevie Ray dropped out of his school, Justin F. Kimball High School, and decided to focus on being a musician. 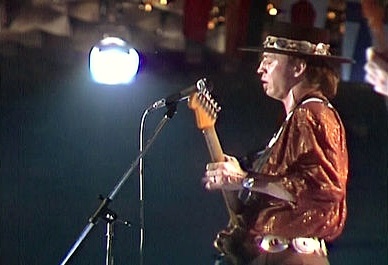 He moved to Austin, TX to make a living out of being a musician. It wasn’t easy for Stevie Ray as he started out with nothing. He slept as his friend’s couches and collected bottles for money. He was spending most of his time playing music and band hopping to earn an income. During this time, he was taking semi-regular gigs already.

By 1975, Stevie Ray formed a band named Triple Threat but it was changed to Double Trouble later on. Stevie Ray was the lead singer of the band. Double Trouble had a good following in Texas and because of this, the band’s name became more popular. Mick Jagger heard of the band and invited them to play at his NYC private party. It was a great way for the band to get more exposure. During that year, Double Trouble also played at the Switzerland Montreux Blues & Jazz Festival.

Still in Austin and still playing his best, David Bowie heard Stevie Ray play. He was impressed and asked Stevie Ray to play on his album, Let’s Dance. Since David Bowie was a popular musician at this time, the album had a lot of commercial backing, which was hugely beneficial to Double Trouble. They signed a record deal with Epic and worked under John Hammond, Sr.

The first album was born, it was called Texas Flood. This album reached no. 38 in the U.S. charts and immediately gained recognition. Stevie Ray was also noticed by the readers of Guitar Player Magazine. They voted him as 1983’s “Best Electric Blue Guitarist” and “Best New Talent.” 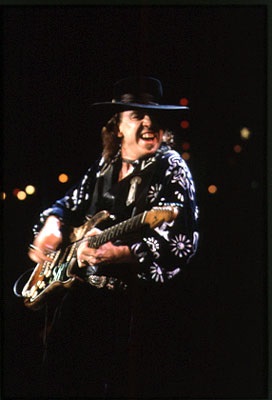 After the successful release of their first album, Double Trouble went on a tour. This was also the time they recorded their second album called Couldn’t Stand the Weather. Their second album was a success too, reaching no. 31 on the U.S. charts. By 1985, the album went gold.

Stevie Ray and his band found huge success during this time period. They were recording left and right and were able to produce records like, Live Alive and Soul to Soul. With four successful albums under their name, the band was nominated for a Grammy.

The National Blues Foundation Awards recognized Stevie Ray’s talent and named him “Blues Instrumentalist of the Year” and “Entertainer of the Year.” These nominations and awards were very special to Stevie Ray, as he was the only white musician to receive such recognition.

Stevie Ray was paying a price for his success, and it was his personal life that was suffering. First, his marriage with Lenora Bailey resulted in separation in 1979. Next, he got hooked to alcohol and drugs. And the last straw was when he collapsed in 1986 during an European tour. After that, he went into rehab.

While in rehab, Stevie Ray realized that the music scene was a huge factor in his spiraling down. After rehab, he decided to stay away from the music scene just to get back in shape. By 1988, Double Trouble was performing again and has plans of making an album. Stevie Ray was ready.

In 1989, their 4th album was released, Step. The album highlighted Stevie Ray’s driving guitar style, which was evident in the songs “Tightrope” and “Wall of Denial.” Both of these songs also described Stevie Ray’s personal struggles in life. This album went to the no. 33 in the U.S. charts and was awarded a Grammy for “Best Contemporary Blues Recording.”

In 1990, Stevie Ray and Jimmie worked together to create an album that would be released October that year. The album was called, Family Style. Sadly, Stevie Ray passed away before the launching of the album. He didn’t live to see his work with Jimmie come to life.

The Passing and the Legacy He Left Behind

The death of Stevie Ray was tragic. Double Trouble was playing in East Troy, Wisconsin on Aug. 26, 1990. They were having the time of their life playing with the greats like Buddy Guy, Robert Cray and Eric Clapton.

After midnight, Stevie Ray decided to hop on a helicopter to go to Chicago. With very foggy skies, the helicopter crashed. No one survived. Stevie Ray’s remains were brought to Laurel Land Memorial Park. The memorial service was attended by as many as 1,500 people.

Although Stevie Ray was taken from us too soon, his legacy grew and remains. By 1991, the governor of Texas, Ann Richards, recognized Stevie Ray’s big contribution to its state through music. She proclaimed the “Stevie Ray Vaughan Day” on October 3, 1991.

Stevie Ray was indeed recognized for his work, his talent and guitar playing skills. He was also honored for his contribution to The Blues and his home state of Texas. But what we all shouldn’t forget is that Stevie Ray’s legacy is not just about his accomplishments in the limelight. Not many may know that Stevie Ray wasn’t just an artist who plays blues, he was a fan of the blues. He loved it, lived it and died with it. And that’s why his legacy remains in the hearts of many.