Guitarists and guitar lovers have long wondered how they could alter or enhance the traditional guitar. Sometimes the goal is a wider note range, better functionality, or simply a customized instrument. Scott Summit has found a yet undiscovered first in the world of guitars. He created the first 3D printed acoustic guitar. To clarify it is not the first 3D printed guitar ever, as 3D printed electric guitars do already exist.

Summit has had a love of guitars since childhood and does currently play, mostly for friends and occasionally in bars. He works as a designer of prosthetics and body parts that are made with 3D printers, so he is very familiar with this industry and the potentials for this unique technology. This is clearly a personal passion, as he created the model on his laptop while on vacation.

Once it came time to realize the final product, Summit had his doubts. The amount of pressure from stringing the instrument and tightening the strings was likely to cause the plastic guitar to break. This first product is made of fused plastic. Ever the curious innovator, Summit had a video camera on the ready in case it did cause an explosion of plastic and strings which would at least make for great video footage. But alas, this leading 3D designer was more successful than even he predicted.

Not only did it withstand the stringing and tuning process, it is a great sounding musical instrument. Business week has quoted Summit as saying “it’s rich and full and has a great tonal range” in regards to the sound of this latest breakthrough in the world of guitars. Clearly this is just the starting point, and interested guitarists should check in with 3D Systems who has acquired the startup. Summit sees guitarists eventually going online to customize every part of the instrument and its sound, and then the software will create it.

Some see this as a small feat since 3D printed electric guitars have been around for a few years. The most well-known name in 3D electric guitars is that of Olaf Diegel, a professor of mechatronics at Massey University in Auckland, New Zealand. He touts his guitars as more sturdy, a good thing for those who want to throw and smash instruments, but it does lose the rock-n-roll effect. He does stray from an all plastic design by adding a wooden core to his guitars. He feels it helps with the sound. Come critics have said that this is hardly revolutionary since it still relies on the wooden core, but perhaps with Summit’s breakthroughs the 3D printed guitar world will start in earnest. 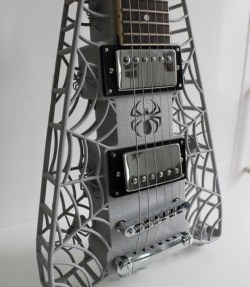 A look at other recent guitar innovators shows that often these are an exciting whimsy, something new to geek out over, but have hardly replaced the traditional design. In the 1980s Ulirich Roth, a German guitarist also known as Uli Jon Roth, came up with the concept for his sky guitar. The sky guitar has extra frets which allow it to reach higher notes, these are the notes typically reached by a violin. In 1990 the Tahitian Ukulele, also called a Tahitian banjo, differs from other ukuleles in its solid sound box. Strings are often made of fishing line for this instrument. The unique design gives it a higher, thinner feel.

There are more unique instruments that musicians have seen and played over time. Some have led to musical breakthroughs that have changed how and what guitarists played. For those with a passion for music and design what could be a more exciting project than possibly creating the next big thing? The question now is if the world of 3D printed instruments will be a fleeting fad or lasting industry, and only time will tell.