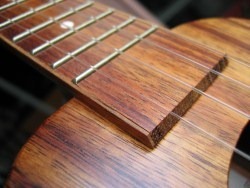 Until recently, ukuleles were thought of mainly as toys or novelty instruments. Few people thought of them as instruments for real music making. Today, however, ukuleles are finally getting the respect they deserve. From Bruno Mars to Train, they found their way into pop hits, and have also been used in a lot of rock and folk music. Ukuleles are now in high demand and a great, easy, instrument to learn and play.

Pick up a ukulele and in less than an hour you can learn the three basic chords and play many favorites. The strings are made of nylon, which is easy on the fingers, and there are only four of them, which makes learning chords easy.

Shop Smart for Your New Ukulele

There are many different brands and makes of ukulele available in a wide range of prices from as little as $20 into the thousands.

The cheapest ukuleles should be avoided, because they can be so poorly constructed as to be unplayable. Badly made stringed instruments are often impossible to keep in tune because their necks aren’t set up well. That doesn’t mean you can’t find great, playable ukuleles for a decent price. You just need to know what to look for. There are four main things to keep in mind when buying a ukulele: material, hardware, size, and amplification.

I’m assuming you’re not looking for a plastic ukulele, because we’re going for something playable here. But there are many different kinds of wood that ukuleles are made out of. You can’t go wrong purchasing a ukulele made out of the same kinds of woods traditionally used to make guitars, like maple and rosewood.

Higher end models may feature spruce tops or more exotic woods such as Koa or Mango. Different woods vibrate differently which makes for a different sound, but a ukulele made of any decent quality wood will sound sweet. The best way to determine which one you prefer is to try a couple of different ones out.

There has also recently been interest in bamboo ukuleles. Enthusiasts claim that bamboo ukuleles are solid and robust sounding, and easy on the environment because of bamboo’s renewability.

Unless you are purchasing a high-end ukulele, avoid tension pegs. A tension peg is a tuning peg like a violin’s, without any gears. It relies on friction to stay put and stay in tune. On very well-crafted instruments, tension pegs can be fine, but with less-expensive models you can’t be sure that the peg won’t slip and throw the instrument out of tune. When in doubt, go with an instrument with machine pegs.

There are four main sizes of ukulele: soprano, concert, tenor, and baritone. Each produces a different kind of sound. As a general rule, the larger the instrument the lower the pitch of the sounds it plays.

If you want the classic sound most people think of when they think ‘ukulele’, you should get a soprano. Concert ukuleles are slightly larger, with a lower range, and sound a bit more like nylon string acoustic guitars. Tenor ukuleles are deeper and richer in sound. Some find them to be easier to play than the smaller ukuleles because the strings and frets are farther apart. They feel less “crowded” to play.

Baritone ukuleles are the largest, sound the most like classical guitars, and are strung in a way more familiar to guitar players – DGBE instead of gCEA for the other sizes of ukulele. (The little ‘g’ indicates a higher pitched string, similar to a five string banjo).

Many suggest that beginners start out with a concert or tenor ukulele because they are easier to learn due to the more comfortable string placement. This, of course, may be different for very young players who might find the tiny strings and frets of a soprano quite comfortable. For those players, a soprano ukulele is an ideal starter instrument.

Like acoustic guitars, some ukuleles are set up to be plugged directly into an amplifier and others are not. If you are simply looking for something to learn on and play for yourself, a ukulele without a pickup is fine. But if you think you might want to play your ukulele in a band or in live performance, you may want to consider an acoustic-electric one.

What are the Best Brands?

There are a few ways to go here that will both work well. You can either seek out companies that specialize in ukuleles, like Kala and Lanikai, or you can go with ukuleles made by companies that are primarily known for guitars and basses like Fender, Epiphone, Washburn and Cordoba. Either way, you can get a good, playable, instrument at a good price. Just beware of the super-cheap no-name models that are often hard or impossible to set up and play.

Bruno Sturgess writes about music and musical instruments, and loves the ukulele.

The Anatomy of the Electric Guitar