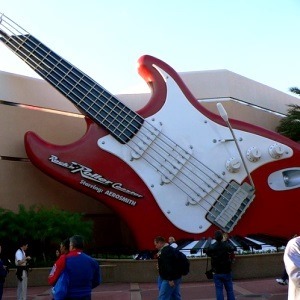 Today let’s take a break from lessons in becoming the next guitar god and have a look at one of the world’s largest guitars.

As a veteran of eating at several Hard Rock Cafes, I Have always loved the huge guitars which are often sited outside of the restaurants. I know they are gimmicky and a little kitsch but there is something striking about these things and it appears that I am not alone in my feelings about them.

I understand that when the original Dubai Hard Rock Café was closed in 2009 in order to redevelop the site, there was an outpouring of grief regarding the impending demolition of the signature guitars which adorned the front of the building.

The Dubai Hard Rock Café was an iconic building in the city. The mini Empire State building was fronted by two enormous crisscrossed Fender guitars and was a favorite hang-out of locals, expats and tourists alike. Plans to open a new venue in the city following the 2009 closure failed to assuage the fans whose primary concern was the fate of the 15 metre high guitars. Dubai 92, a local radio station launched a campaign to save the Fenders and a Facebook petition was established.

Eventually local organization Move One said they thought they would be able to safely move the guitars and undertook a site inspection. It was felt that they could be moved and transported by making only one or two divisions in the structure but the inspection revealed that the guitars, estimated to weigh 100 tons, may not be removable intact.

Demolition of the building has started at the rear of the structure and thus far the guitars are still standing but time is running out to find a solution. It was promised that the new venue would feature the world’s largest guitar but has sadly opened without it.

I can’t help feeling that a hard rock without a giant guitar just isn’t a proper Hard Rock Café. Seeing the ridiculous architecture is part of the experience of visiting the venues after all! Maybe it is the theme park enthusiast in me but themed venues like this need grandiose features, it is just the way things should be. Take the Rock ‘N’ Roller Coaster ride in Florida. This ride has a giant guitar at the entrance, it is the obvious thing to do.

It remains to be seen whether or not Dubai’s iconic guitars are to be saved and if the World’s largest guitar will appear at some point outside of the new café. If they do save the old statue I am curious to see what they will do with it. What could you do with two 15 metre concrete guitars? Perhaps the obvious solution is to move them to the new venue which may be why the new guitar has been delayed?

Sally Stacey is an enthusiastic blogger and music fan currently writing on behalf of Westmount Music.

Top 4 Iconic Guitar Brands And The Legends Who Endorsed Them

The Growing Pains of a Beginner Guitarist