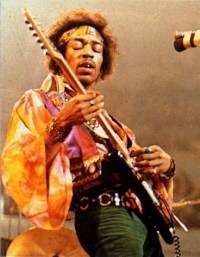 Being left-handed is not the easiest thing in the world. Everything around us seems to be designed keeping in mind only right-handed people. From cameras to scissors, everything is better suited for right-handed individuals.

Jimi Hendrix was anything but conventional. Even for a rock god, Jimi Hendrix stood out as something of an oddity. Of course, that only further contributed to his legend. One of his unconventional practices involved playing the guitar left-handed.

Hendrix’s playing style was extremely influential and has inspired generations of youngsters to take up the guitar. Jimi Hendrix wasn’t just satisfied with playing the same tunes and chords as every other established artists; he wanted to push the limits and create magic with his guitar.

Being left-handed undoubtedly gave him an advantage when it came to strumming up some wild tunes that no other guitarist could match. Headliner of the Woodstock Festival in 1969, Hendrix is considered to be perhaps the greatest electric guitar player of all time.

No conversation about under-appreciated artists is ever complete without someone mentioning Dick Dale. Yes, he was famous and had a significant fan following. But, we can all agree that he was never accorded the level of respect that he actually deserved.

The fact that he was a major influence on a number of artists, including the Beach Boys, Jimi Hendrix and Eddie Van Halen, shows just how good he really is. One only has to listen to his legendary track Misirlou and you understand why this man is considered to be a guitar legend.

The Beatles are often touted as the greatest band in history and there will perhaps never be a band that will be able to generate the same level of hysteria as Beetlemania. Paul McCartney became a household name along with John Lennon, George Harrison and Ringo Starr.

After the Beatles split up, Paul McCartney continued to have an amazing solo career. His singing often drew away from the fact that he was more than just a competent guitarist; he is one of the best when you place an acoustic guitar in his hands.

Learning to play the guitar when you are left-handed can certainly be quite challenging. However, the guitar is not an easy instrument to learn and any extra work you have to put in will be rewarded many times over.

Jim Thomas is the author of this post. Along with writing about his favorite musicians, he provides guitar lessons through his website which would set you on a path of understanding music on the guitar.