Are You Really Stuck, or Is It Just Your Mind Tricking You? 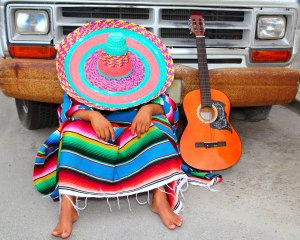 Sooner or later every guitarist needs to face one serious obstacle – the feeling of being stuck.

Do you know what I’m talking about? Were you already there? Are you there now?

Usually, it starts quietly with you just not being able to learn this one new guitar trick you’ve overheard on the radio. After three days of trying you’re still nowhere. The focus on this one single thing starts to impact your overall progress, and it affects your mindset too. Sooner than you know you are stuck, and you can’t learn anything new.

So if you’re constantly playing the same tunes you’re probably not going to notice that you’re stuck. Which isn’t necessarily a bad thing. I’m not here to convince you that you have problems that simple aren’t there. Playing guitar is all about fun, so until you’re having fun there are no problems.

But what if you do feel that you’re stuck… What if you’ve noticed that you’ve been playing for three years and you’re not any better now than you were a year ago?

The dangers of being stuck

Being stuck can be depressing, and it takes the joy away. You’re frustrated, angry, and maybe even start to think that you’re not talented enough.

(First of all, talent is just a mere 20% of success. The rest is practice, persistence and determination, but that’s a topic for a whole different post.)

Eventually, this feeling causes some people to quit guitar playing altogether. Like it did to me…

If you know me, you’re familiar with the story of me quitting the guitar adventure and not getting back to it for a number of years. I think my guitar laid on a shelf for about four years or more, until I realized what guitar playing really meant for me. That it wasn’t about being the best in the world, but about enjoying every note I make no matter how not-perfect it is.

The feeling of frustration, anger, self discouragement was exactly what I felt, and I was probably too young to get through it and regain my control over the situation. Which brings me to…

Regaining control and getting unstuck

First of all, are you really stuck or is it just your mind trying to trick you?

Being stuck is often just a mindset problem. Something you need to fight off, and emerge as the winner after some time of struggling.

Here are some possible scenarios.

Are you trying to learn a new trick but can’t get to master it, and it’s taking you several days now? If so, you are not stuck, you’ve just found a worthy adversary.

This one trick/technique may be standing way above your current skill set. You just have to continue practicing and after you reach a certain level of mastery you will be able to tackle this new technique.

Another scenario. Are you trying to learn multiple techniques at once and can’t seem to truly master any of them? This is a problem of time and not focusing enough attention on each individual technique.

Some aspects of guitar playing are easily graspable, you just have to listen to them twice then practice them several times and you’re good to go. However, some require serious amounts of time to master.

If you stumble upon a couple of such techniques, and you try to learn all of them simultaneously, you’re spreading your time too thin, so each technique takes significantly more than normal. This results in an impression that you’re stuck.

An easy solution to that is to focus on just a handful of things, and not try to do everything at once.

The above scenario hardly ever happens to people who are attending an individual guitar class. That’s because every teacher guides their students to work on only a couple of things at the same time. However, it happens very often when you are teaching yourself, and you’re not focusing on planning your guitar journey. Try to keep that in mind.

One more scenario is that you try to perform a certain technique without having the fundamental knowledge on how to actually go about it. This usually happens when you see something interesting at a live performance or in a video and you want to replicate it, but you don’t really know how the guitarist actually did it, so you try to come up with your own ways.

Sometimes this works because you’re developing your creativity and have some extra fun. But more often it doesn’t. Especially for some really creative techniques and tricks (and those tend to be the most eye-catching).

What’s worth realizing is that guitar is an old enough instrument that most of the stuff has already been documented, and you can find notes and instructions for almost anything.

So whenever you see something that’s new for you it’s a good idea to start by doing some basic research. Which I know from my own experience is not always the most intuitive thing to do – simply grabbing a guitar and playing is a lot more convincing.

We’ve talked through some possible being stuck scenarios, so now it’s time to go back to the initial question – are you really stuck or is it just your mind trying to trick you?

In the end, as it turns out, there’s no such thing as being physically stuck. It always sits in your mind. Your body is constantly adapting to new activities and movements, so there’s no possibility that it stops doing this. The only obstacle is your mind. Being aware of this can really help you in getting unstuck. Anyways, it helped me.

I hope this post will be helpful to those of you who are struggling with this problem right now. Feel free to comment and tell me what you think. What is your approach at fighting this feeling of being stuck?