The Royalty – Paul McCartney – The Profile 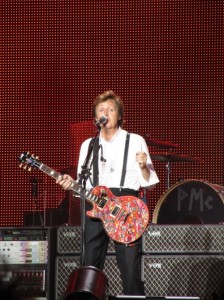 I’m sure you’ve heard about one of the greatest pop bands of all time, The Beatles. You may not have been born when they were at their prime but this you should know – they are legends. Paul McCartney is instrumental (literally and figuratively) in the success of The Beatles, and it’s time that you get to know who this music legend truly is.

Paul McCartney is from Liverpool, England. He was born on June 18, 1942, which makes him 71 years old now. With his work, the Beatles became one of the greatest pop bands in the 1960s. That sounds like an understatement… one of the greatest pop bands of all time. The Beatles helped in transforming the music business back then. When the band disbanded, Paul went on to become a successful solo performer.

Paul’s musical inclination was due to the influence of his father, James McCartney. His father was a jazz pianist and was part of a local band. His mother was a maternity nurse. He was raised in a working class family.

When Paul was 14 years old, his mother passed away due to a mastectomy complication; a situation very close to the heart of his later band mate John Lennon.

By 1957 (he was 15 years old), he met John Lennon at the church festival where both of them were performing. At that time, Paul felt at ease with John so he decided to join John’s band named he Quarrymen. Paul and John became the songwriters of the band.

Being in the Quarrymen together helped Paul and John to become closer. By 1960, they decided to form a new band together with George Harrison, Pete Best and Stuart Sutcliffe. During that year, the Beatles were simply playing in nightclubs in Hamburg, Germany. They continue this for two years until Sutcliffe left the band and Paul played the bass.

Their first break was when they captured the attention of Brian Epstein, the later Beatle’s manager. From Hamburg, they moved back to Liverpool, England and started working on their music there. During this time, Best also left the band and Ringo Starr replaced him as the drummer. Little did they know that this change will help propel the band’s popularity to new heights.

It cannot be explained clearly how the Beatles impacted pop music in the 1960s. The best word to describe that time was “Beatlemania.” When the group debuted in America, they took it by storm. Not only did they grip the world with their music, their music also helped bridge the musical crossover of American and British pop.

The Beatles’ best hits include Yesterday, Let It Be, Hello, Goodbye, Yellow Submarine and Hey Jude. They popularized rock ‘n’ roll through their music and Paul McCartney was there every step of the way. He was the one who wrote the biggest hits of the Beatles, and these songs are still popular today. A true testament of his work, skills and talent as a musician.

The Beatles played together for 8 years, from 1962 to 1970. They were able to produce 12 studio albums, (all of which were a hit) and touring the world.

The disbanding of the Beatles was indeed heartbreaking but this didn’t stop Paul from continuing his music career. In 1970, he released his first solo album titled McCartney. The album was well-received by the public and this inspired Paul to form another band. The band’s name was Wings and they won two Grammy Awards in the 1970s and produced several hit singles.

Paul married Linda Eastman in 1969 and they were together for 29 years. They had three children together, namely Mary, Stella, James and Linda’s daughter, Heather, from a previous marriage. Linda died in 1998 due to cancer.

The 1980s was quite a tough time for Paul. He was arrested for marijuana possession in Japan and what was more devastating was the assassination of John Lennon in the same decade. By 1989, Paul felt better and continued on playing and recording music. He was collaborating with the likes of Michael Jackson and Stevie Wonder. 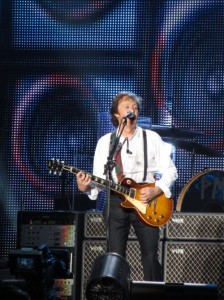 By 1990, Paul worked with Ringo Starr and George Harrison on The Beatles Anthology, a documentary series depicting the life of the Beatles. In 2012, Paul McCartney released the album Kisses on the Bottom which featured his most favorite songs from his childhood, mostly classics actually.

Later that year, Paul had memorable performances too. The first one was when he performed with Bruce Springsteen in London’s Hyde Park. They sang the popular Beatles’ songs I Saw Her Standing There and Twist and Shout.

This 2013, Paul joined the 2013 Bonnaroo Music & Arts Festival in Tennessee. This is a four-day event where fellow artists Billy Idol, John Oates, Tom Petty, Jeff Tweedy and Bjork are performing too.

His contribution and work in the music industry is beyond measurable. And he doesn’t stop there. He also ventures into film, activism, painting and writing. He still continues to sell out concerts and still tours despite his age. Paul isn’t slowing down anytime soon. He loves music this much and that’s why music loves him back that much too. Paul was quoted saying:

“Why would I retire? Sit at home and watch TV? No thanks. I’d rather be out playing.”

Paul McCartney isn’t the best guitarist out there for sure and if you’re looking for a guitar master, that’s not really him. However, if you’re a musician at heart, you have to know the best of the best. Paul is an awesome songwriter and without this skill, it’s hard to translate into notes what the song really means. Be inspired by his life story and how he continues to play even after 70 years old.

Passion and love for music, that’s what you need to learn the guitar and become a great guitarist someday. It’s not about making money or the fame, it’s doing what you want for as long as you can.