Learning the Basics of Guitar Theory 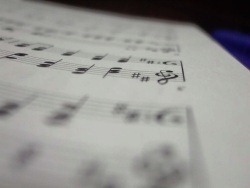 Before you can mimic the iconic figures you see rocking out on stage in music videos, though, there’s the not-so-small matter of learning and perfecting your guitar theory. So if tones remind you of hair color and a chromatic scale sounds like something you’d weigh yourself on then perhaps you’d better read on…

A basic description of … Notes

Luckily, there aren’t hundreds upon hundreds of notes to learn for the guitar, or any instrument for that matter. There’s just a mere 12 that you have to get your head around.

What makes this even easier still is that you only need to learn 7 letters, A through G, the first seven letters of the alphabet. These are known as natural notes. The other 5 will come clear further on. They are called enharmonic notes and are sharp (denoted by a #) or flat (denoted by a b) versions of the notes A, C, D, F and G.

A basic description of … Tones

(As well as semitones.) This is simply the distance from one fret to another and a fundamental part of playing the instrument. For example, if a string is an E note and you place your finger on the first fret of the string you have an F. This is a semitone.

A basic description of … Octaves

Octaves add the sparkle to music by adding a higher pitch to a note and are the interval between two musical pitches at either half or double their frequency. One look at Wikipedia makes it apparent that the science and frequencies of octaves can get complicated so for the sake of simplicity we’ll leave our description there!

A basic description of … the Chromatic Scale

To discuss this, we must first discuss scales, which at their most basic are a series of notes played one after another (played through semitones and tones). There are numerous scales you can learn, but with chromatic scales it’s important to know that these use sharps and flats. To create a chromatic scale, you must always move up in increments of semitones.

Where this differs with scales is that (major) scales always have 7 notes, or 8 if you include the octave. Major scales can be simplified down somewhat in that there is a formula to follow to create a major scale.

This formula goes: A B C# D E F# G# A; and it is applicable to all major scales.

So, the theory is confusing to say the least, and we haven’t even begun to scratch the surface! Guitar theory is worthwhile learning to accelerate your practical learning of the instrument and your musicality. Whether via self-learning, one-on-one lessons or online lessons, get going with the theory and begin your way to mastering the guitar!

Lucy works with Frethub, a company that specializes in teaching guitar online with a number of free tutorials. She’s learning guitar herself and so fully appreciates the complexities of guitar theory!

Here’s a Capo for Every Chord