Getting to the Last 10% of Guitar Mastery 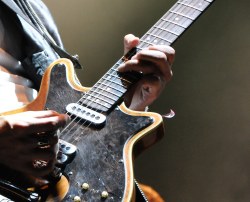 Here’s an interesting concept. I was first introduced to it by Seth Godin – one of the most famous marketers of our times. What marketing has to do with guitar playing? At least one thing, as it turns out.

In one of his blog posts Seth talks about the concept of the final 10%. The idea is that getting 90% proficient in something (no matter what the field is, so guitar playing is a good example here) can take you less time then going from 90% to 100%.

What it means is that most of the time you can get pretty good at something in a relatively sport span of time, but if you want to get truly exceptional (going the final 10%) it can take you years.

Going the last 10% with guitar playing

Here’s the idea, and tell me if this sounds familiar. Have you ever felt frustrated that improving your skills beyond a certain stage just keeps getting harder and harder?

Just because you’re not learning at the same pace you used to in the past doesn’t mean that you’re stuck, or having a down period of any kind. Maybe you’ve just reached your own 90% mark.

How do you know if that’s the case? Well, there’s a certain set of skills that can be named as the “90% skill set” – things that every guitarist needs to learn and understand to be able to play anything.

I mean things like guitar chords, scales, getting basic agility and strength in hands and fingers, learning how guitar tabs work, mastering all the basic techniques (hammer-ons, pull-offs, etc.), and other things.

Next, there’s the “final 10% skill set.” This one’s not about single techniques, but about getting natural with them, and using them with ease while performing any music imaginable.

Despite the fact that the final 10% skill set doesn’t seem like a big thing, and that essentially it contains the elements you already know, it still is the one that’s going to consume the most of your learning time. And this can be frustrating.

However, it gets a lot less frustrating once you understand that it’s just the way guitar playing works. The takeaway here is not to quit too soon just because you think you’re stuck. Understand that after reaching the 90% mark every single percent will be harder and harder to get, and it has nothing to do with being stuck.

How to keep improving

Once you think you’re at the 90% mark a good way to go forward is to focus on a single thing and try to improve just that.

You can, for example, devote a whole week or even a month to improving your speed. Or your ability of shifting your hand smoothly around the fretboard. Or whatever other thing. But the main idea stays – only one thing at a time.

When you’re starting out it is easy to be working on multiple different things at the same time, but once you get to a certain level it’s no longer possible. The only way forward at that point is to focus on specific aspects of your guitar playing.

One additional thing that helps here is having a teacher.

You can get some basic skills on your own, without a teacher, but getting passed a certain point in your journey will be hard if there’s no one who can actually guide you, and tell you how to do it.

If you’re learning on your own you will spend a lot of time on figuring stuff out. I know that it can give you much satisfaction, but it’s actually a lot faster if you have someone who can simply tell you how to do something, instead of forcing you to lose time on figuring it out on your own.

Just to summarize this post in a single paragraph I advise you to:

Never quit when you think you’re stuck and not going anywhere. Chances are you’ve reached your 90% mark. Improve one skill at a time. That way you’ll be able to see your progress more clearly. Find a teacher, or simply someone who can guide you towards the last 10%.

I’m curious to know your opinion. Does this 10% idea make sense to you? Feel free to share.