How To Shop For EQ Pedals

The two most frequently encountered questions when it comes to EQ are (1) “what is that?” and (2) “why should I care?” The next most frequent question is: (3) “aren’t the knobs on the front of my amp enough?” 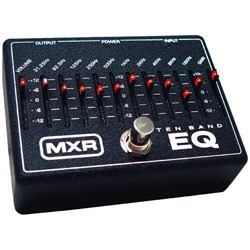 You may have also heard of “graphic” EQ and “parametric” EQ.

Graphic EQ: This just means that the controls of the filters are arranged so that when you look at them, you have a visual representation of the way that you have shaped the sound from low to high.

So you turn up low frequencies and turn down high frequencies by moving left hand sliders up and right hand sliders down. Glance at the controls (as opposed to knobs that you turn) and you can see how the sound has been altered.

Not many stompbox style EQ’s are parametric. One notable exception is the Electroharmonix Tube EQ, which is as the name suggests an EQ that uses a vacuum tube instead of solid-state circuitry (which is also unusual.) The EHX Tube EQ offers one parametric channel alongside simple bass and treble controls. BY combining the two, you get a significant amount of control over the sound. 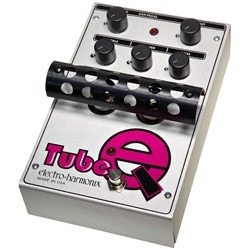 Why should I care?

Equalization gives you a great deal of control over the character and timbre of your sound. It also allows you to place your instrument’s sound in the context of the rest of your band, by ensuring that two instruments aren’t competing for the same frequency range, or making sure that a solo instrument stands out from the rest of the group. (They are also useful for controlling unwanted feedback by rolling back on a problem frequency.)

The power to tailor an instrument’s response at various frequencies is surprisingly powerful. Oftentimes what is heard as an “effect” on an instrument, or really exciting distortion or overdrive, is achieved to great extent by an interesting or unusual equalization profile.

What about the knobs on my amp?

The two or three “bass/treble” or “low/mid/high” knobs on an amplifier or effects pedal are also equalization filters. They are usually what are called “attenuation” filters or “shelving” filters, which means that they do not boost or elevate frequencies, but only cut them.

In other words, if you turn up the ‘treble’ knob on your amp, in most cases you are not “adding treble,” but taking less treble away (the range goes from –x to 0, not –x to +x.) Turn your tone knobs all the way up, and you are hearing the sound of the amp without any equalization.

By contrast, on a standard graphic or parametric EQ “0dB” is the middle position, with up positions providing a boost (+dB) and down positions cutting (-dB). (Yes, this means that most graphic EQ’s are also simple preamps.)

So how do I shop for EQ pedals?

Your choices here are basically two:

If you want a parametric EQ in a stompbox, your options are limited. There is the EHX model described above, and one by Carl Martin, which allows you to sweep through three frequency ranges to target peaks, but does not give you the bandwith or amplitude controls.

If you want a graphic EQ, you have two basic options: (1) How many frequencies you can target, (2) how much you can cut or boost each of those frequencies. In addition, some units come with a gain control that allows you to boost the overall signal, while others do not.

Having more frequencies to target can be a great thing, because it gives you greater power to shape your tone. However, it can also cause setbacks, due to the learning curve. Working with ten bands of EQ can be challenging, and in many cases is unnecessary to get everything you want out of your sound. 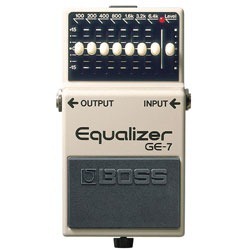 Bruno Sturgess loves to help musicians get the most from their effects pedals.

Want to Be Better at Guitar Playing? Practice at Fixed Hours