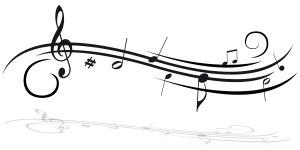 You already know how to read guitar tabs… that’s easy.

But what about notes? You know, the stuff Beethoven and Mozart were working with. It may sound sad, but you’re not a musician until you can read notes.

Tabs are fine, but they don’t tell you anything more than what sounds to hit. They say absolutely nothing about how long the sound should last or how loud/silent it should be. Notes do.

More than that, notes are universal. If you give a tab to someone who plays a different instrument they won’t be able to do anything with it. Notes can be read by every musician no matter what instrument they play.

Now the good news, the principles of reading notes are not actually that hard to grasp. Of course, truly mastering this will require time and practice.

First of all, you have to learn the placements of main notes on the fretboard. Check out the image below. Click the image to enlarge it.

As you can see guitar has a pretty good range of sounds it can make. Starting from the low E and ending on the super high E.

It all begins by memorizing these notes. I’m sorry, but this step can’t be skipped. The difficult part about it is that the progression on the fretboard is not constant. Notice that some sounds are on the neighboring frets and some are two frets away. That’s because there are no sharp notes shown here.

Another thing with guitar is that one note can be played in different positions.

One of the main differences between notes and tabs is that notes don’t tell you exactly which position to use. They leave the choice up to you. And since there are 6 strings you have many possibilities to choose from.

Here’s the full range of sounds on a 22-fret guitar neck (click to enlarge).

Choosing the right position is not that challenging when you have to play a single note like you would during a solo, for example. But many guitarists find it hard to read guitar chords when they’re written in musical notation.

When it comes to chords, I don’t even try to actually read them. I just remember what’s the notation for most popular chords and play them automatically. An easy way out, but hey, it works.

To be able to play naturally, you have to be able to jump to a given position quickly and without any error. This can take some time, but it’s good to start by using a piece of software like Guitar Pro.

You can load some music and look at both musical notation and tabs at the same time. The rule would be to try to play by looking at the notes and only display the tabs when you’re stuck. This forces you to think while you play and predict the next best position.

It’s also good to develop some kind of a system for recognizing notes. You have to find your own way – one that works best for you, but let me just quickly share what I do.

I don’t remember every note on the fretboard, sorry. I only remember the first 12 (ones I listed earlier). Then they just repeat themselves. Additionally, I know that there’s a 5 fret pitch difference on each consecutive string. Once I got used to this information I was able to pinpoint most of the notes on almost any position.

Also, some experience helps here too. If you’ve been playing guitar consciously for a number of years you’ve probably memorized all the notes along the way (as a by-product, so to speak).

I think it’s best to leave this here. These 3 steps are more than you need to keep you busy for a week or two.

How to Clean Your Guitar (Strings and Other Components)