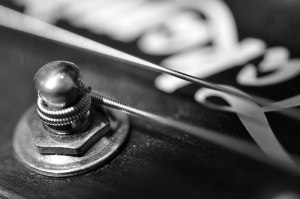 If you know how to take care of your guitar and you’re somewhat lucky as well, you might be able to play your current instrument for years to come, maybe even your whole life. But you’re ain’t going to be able to play the same strings your whole life no matter how well you can take care of them. So how often should you change guitar strings and what strings to choose? – This is the question I’m going to answer in this post.

Guitar strings are one of those elements that wear out pretty quickly (depending on how often you play), and need to be changed every now and then if you want to enjoy the true sound your guitar can make. Let’s take it from the top:

How often should you change guitar strings?

Guitar strings should be changed whenever one of two scenarios occurs:

The former depends on your guitar playing habits. If you’re playing every day for an hour or two then you might want to change the strings as often as once every other week.

If you’re a performing artist then don’t ever go on stage without a new set of strings. OK, I know, if you’re a professional artist you’re probably not even reading this post because you already know all this. But if you’re new to making some appearances on various garage concerts and so on you might forget about this simple thing.

Remember, if a string is to break it will inevitably break during a performance right before you’re about to play your big solo.

If you don’t play that often your strings might die of old age. In this case I advise to change them every other month or every three months.

Again, if you’re planning on impressing your girlfriend with a nice tune it’ll be nice to have a new set of strings for that too. 🙂

What strings to choose

Since the question of how often should you change guitar strings has already been answered let’s take a look at different characteristics of guitar strings. There are three ways you can look at this matter:

First up is the manufacturer. Basically, this doesn’t make such a difference for a beginner or a semi-advanced guitar player. As long as you go with one of the recognizable brands there’s no difference which one you choose exactly.

Some more advanced guitarists like to experiment by putting different types of strings on different guitars, like putting nylon (classical) strings on an acoustic guitar, etc. But for starters, it’s good to stick to the traditional approach.

The thickness is the most confusing parameter for a beginner. “What gauge would you like?” is the one question beginner guitarists usually answer “I don’t know.” As a matter of fact this is still my usual answer when the clerk at a guitar store asks it.

Anyway, there are two main ways of describing guitar strings’ thickness (aka gauge).

There’s the normal “human being’s way” in which you can go with strings that are “light,” “medium,” “heavy,” or “extra heavy.”

And there’s the “pro guitarist’s way” in which you’re telling what thickness of strings you want exactly. Here’s a short presentation of common gauges:

The numbers represent the thickness of a string as thousands of an inch… This isn’t really a usable piece of information to be honest.

Now some facts. The thicker the gauge the harder it is to play the strings, the heavier they are. So your fingers will get tired quicker, and you will feel a lot more pain.

For a beginner, it’s good to stick to “9s” or maybe even start with “8s” to build up your strength over time, and then switch to heavier strings after a while.

Of course, the ease of playing is not the only difference between light and heavy strings. Heavy strings are often described as giving a better, fuller tone. Light strings produce a thinner sound, but are better for doing all sorts of bends, vibratos, and slides.

In the end, it all falls down to personal preference. After getting some guitar playing experience you will be able to select a set of strings that sound best under your fingers. Until then, like I said, it’s good to start with some light strings and slowly move up to some heavier ones.

Since you already know how to choose the right strings (and how often should you change guitar strings, which has been answered earlier), in the next parts I’m going to cover how to change the strings on your classical, acoustic, or electric guitar. So don’t forget to visit the blog from time to time.

How to Change Acoustic Guitar Strings