Guitar Video of the Month – Usman Riaz and Preston Reed 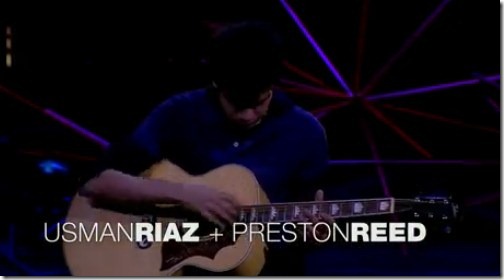 It’s been a while since I’ve shared the last “guitar video of the month.” But there’s a very good reason for that…

There’s simply not that much truly exceptional stuff. I mean, there are tons of videos where people showcase their skills, and some of them are really REALLY good. But to make it to the video-of-the-month level, being really good is not good enough.

That’s why I’m publishing a post in this series only when I stumble upon something really worthwhile.

And today’s the day!

I invite you to take a look at a great performance by two acoustic guitarists – Usman Riaz and Preston Reed.

Usman is a young player (considering his skills). He’s only 21 years old and he learned to play guitar by watching YouTube videos.

Preston Reed is a recognizable figure in acoustic guitar music, and he’s actually a mentor of Usman’s.

Either one of them can produce a truly remarkable performance, but when they start to play together, it all gets to the next level.

Check out for yourself. Enough talking, here’s the video:

Also, feel free to go to the original source – TED.com. Lots of great videos there, although not that much music related stuff.

The technique they’re using was covered here at LearnGuitar2.com some time ago – in another “guitar video of the month” edition featuring Andy McKee.

How to Choose a Guitar Case