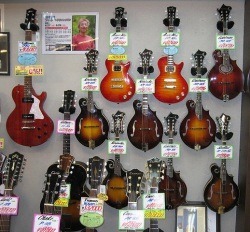 Buying a first electric guitar can be expensive, and shouldn’t be entered into lightly. You’re paying for an instrument and accessories that should last a long time, especially if you’re serious about wanting to learn to play guitar to a decent standard.

There are a number of different issues to consider before buying an electric guitar, from the popular types of electric guitars available, to the quality of tonewoods, and the differences in pickups and body quality.

Different guitars will produce different sounds and levels of comfort for the player. The most typical types of electric guitars include Stratocasters, Telecasters and Gibson Les Pauls.

Stratocaster guitars are notable for their solid bodies and cutaway sides, and generally produce clean sound for the player. The guitars feature two or three single coils, as well as a pickguard.

By comparison, the Telecaster relies on a simple design, with a fixed two single coil pickups on the bridge and the neck, which helps to create a twanging tone for the guitar. A single cutaway shape also means that players can reach higher notes on the fretboard more easily.

Gibson Les Pauls, by contrast, provide a heavier sound due to their two humbucker pickups, and are generally heavier than other guitars.

Differences in electric guitar pickups will create a range of tones, and will assist different playing styles.

Most guitars using a single coil pickup will produce a thinner sound, while those using two coils, such as  Les Pauls, produce a thicker sound.

The best electric guitars will feature high quality tonewoods for their solid bodies, which will make a big difference in terms of their overall performance, and how they deal with the velocity of sound passing through the instrument.

Electric guitars also feature different neck shapes and sizes, which will have a significant effect on playing comfort. Electric guitars range from Stratocaster “C” shapes, while others have a rectangular “U” shape that benefits longer fingered players. “V” shaped guitar necks are also available, which provide greater comfort for playing central chords.

Electric guitar packages can be found that include everything from picks, to cases, mini amplifiers, stands and spare strings. It is worth having all of these accessories if you want to get a head start on practicing without having to worry about adding things over time.

A mini amplifier is particularly recommended while practicing, given the cost of investing in a performance ready amplifier.

As with any guitar purchase, think about what you’ll need to get yourself set up, and don’t be tempted by a flashier guitar model that might end up not being used after a few months. While more expensive than acoustics, good deals can be found on electric guitars, with or without accessories.

Chris is an avid guitar play with 20 years experience. He purchased his first Fender Strat Squire in 1993 and has since moved on to a variety of (considerable more expensive!) electric guitars. If you’re thinking of learning guitar, he strongly recommends LickLibrary.com.

Taking Care Of Your Classical Guitar