There have been a couple of similar series on this blog already. To this day we’ve covered basic major scales, harmonic minor scales, even blues scales. Now it’s time to get started with some basic sharp and flat guitar scales.

Now, let’s see how to play the first pattern of the C#/Db scale. You start by positioning your finger on the 4h fret of the A5 string and playing the first C#/Db sound, and then work your way up until you reach the 2nd fret of the B2 string giving you a C#/Db sound that’s one octave higher.

And here’s the tab: 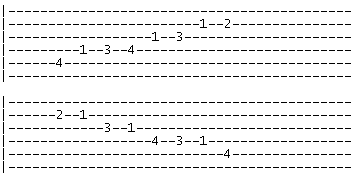 Take a look at the pattern:

Here is the tab:

Such a layout gives you more chance to exercise your left hand fingers, increasing their flexibility and endurance.

If you want to learn more you can visit all-guitar-chords.com and get the full pattern for the C#/Db major scale (click here).

4 Guitar Forums Worth to Have a Look at